By easy, for instance, I mean yelling at all family members to Stay Out of the Kitchen because Mama is trying a new recipe.

By easy, I mean Follow the Directions to a T.

But homemade marshmallows are something I've been dying to try for several years.

My soul quaked within me.

Would it be worth it? I asked myself.

Haven't I heard horror stories about all kinds of candy making? I asked myself.

Do I have a candy thermometer? I asked myself. The answer to that was NO.

I decided to try anyway.

Here are my reflections on what turned out to be an Epic Pinterest Win.

First of all - It. Is. Worth It. I may never be able to stomach store marshmallows again, which explains something: I never cared for them that much in the first place. I only ever really enjoyed them when they were smashed in a S'more, burned beyond recognition. Now I realize my heart was just waiting for my one true love, which is, as it is so often, The Thing the Mediocre Thing Was Originally Based On.

Second, I took to heart what my Mama always told me: if you can read, you can learn to do what you want. So I took a leap of faith and followed the recipe.

Third, and this is important, the recipe I used didn't require a fancy kitchen gadget purchase that I may never have used again. I trusted the instructions and meticulously used a timer. If you're willing to be spot-on with that, then there's a secret:

This is really easy.

I found this recipe on Pinterest for Nutella marshmallows:
http://4hatsandfrugal.com/2013/04/nutella-marshmallows.html 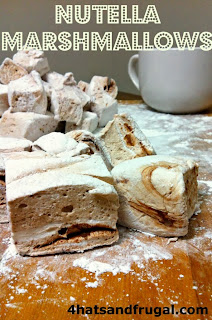 AS SOON as I started any instruction, I set the microwave timer. Here's the beautiful thing: you don't even need to stir. Leave it alone.

A few notes: you must be quick. When the beeper goes off, move into action. This isn't the kind of thing where you can watch TV and come sauntering in after waiting for a commercial break.

My Nutella didn't make gorgeous swirls because I didn't turn the mixer down, so it incorporated throughout. Still delicious, just less visually tempting.

I decided I wanted to make a peppermint batch, so I checked a few recipes because I wanted to keep most of the one above. To make the one above into peppermint, I just omitted Nutella (duh), omitted the vanilla and added 1 tsp. of peppermint extract. After I poured it into the pan, I dropped red food coloring drops onto the top and (working quickly) swirled it with a butter knife.

Another note: the pizza cutter is a great idea and the ideal tool. I think if I'd tried using a knife I would've ended up very frustrated. Until you toss the individual marshmallows in powdered sugar, they are sticky.

So fear not, anxious cook: you too can make homemade marshmallows.

And they are really, really delicious. I've already put in an order for next year's stocking stuffer! Mom

Monitor your child's video game playing time. Video games are extremely fun and very addictive. A child can get sucked into a game for hours on end if there is no parental supervision. Pay attention to the child's time and force breaks and maximum playing times to make sure your youngster still enjoys the world around him.
Free fifa crack
Free Subnautica Crack