Which is why I was much more interested in last night's 2013 Emmy awards than I usually would be.

Now, the last few years, I've enjoyed spring and fall fashion seasons more than I ever have: call it the Project Runway Effect, call it an enhanced appreciation of the art of textiles and how they are worn, call it having a rambunctious boy and needing to melt into something not related to trains, race cars or fire trucks.

So when an award show red carpet opportunity rolls around, I play a little game and guess which of my favorite runway looks will end up on a celebrity. During Oscars season, I call this "Fantasy Red Carpet" (as opposed to Fantasy Football) and "dress" my friends in my favorite picks for them by choosing an ensemble, Facebooking my choice to them, and then waiting to see if any beloved gowns crop up at the Kodak Theater - well, whatever it's called these days (rest in peace, classic camera film: rest in peace.).

After a ridiculous - I mean ridiculous - summer, last night I found myself gravitating to looks that were easy, fun, quirky, and didn't take themselves too seriously. After all, even if you like pulse-quickening dramas, the essence of TV entertainment is, well, entertainment; and entertainment, at its best, knows when to laugh at itself. To me, the Emmy's shouldn't attempt an Oscar level of gravitas (and often, I think the Oscar's shouldn't attempt an Oscar level of gravitas - as 30 Rock slyly hints through the fictional movie Hard to Watch).

Many of my favorite shows come from the BBC, so with only Downton Abbey representing our cousins across the pond, I really didn't have much interest in who won which category (though I did have to cheer for unassuming fellow Michigan native Jeff Daniels).

Let's look, then, at my favorite looks from the evening. Why? Because I get to, it's my blog. Nanny-nanny-boo-boo. And after all, when my sweet husband has been sick since July, and my Grandma fell and broke her leg and is in a nursing home hundreds of miles away, and I mysteriously broke out in hives for a few days, all while having a three-year-old and nine-month-old - well, let's just look at pretty dresses, shall we? 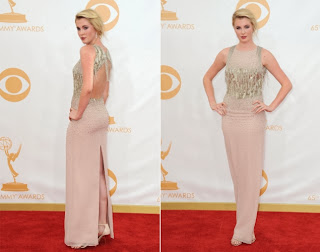 There were many pale blush tones being worn with the sometimes unflattering result that they were too close to the natural skin tone to easily discern what was Dress and what was Wearer. (The stunning January Jones, with a gorgeous chopped Veronica Lake wave, seemed somehow diminished by her shade of blush. See below.) 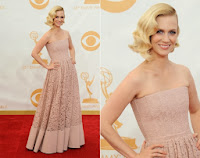 Baldwin's gown neatly sidestepped that conundrum and added silvery fringe on top that nodded to the recent "Roaring Twenties" phenomenon, giving the look movement and fun. The modern hair saved it from being too literal an homage. 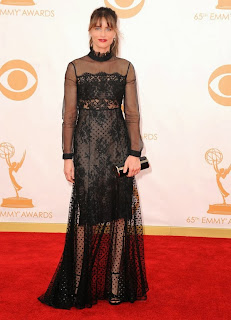 Alongside the pale blushes were high-necked black gowns that created The Miss Haversham dilemma: how to wear this trend without conjuring a weeping Victorian spinster. Though I like Amanda Peet and remember enjoying this gown on the runway, I was surprised to find how dreary it translated - to me, anyway - at the Emmy's: no cheeky fun here.

But fear not: Amy Poehler's version of the high-necked black gown was modern and whimsical (are those dragons on the hips?), with coral accents lightening the otherwise Goth-prone option. 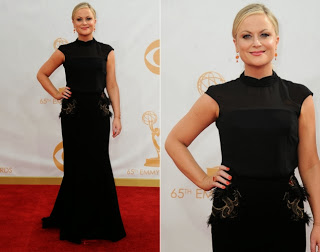 The Color Purple: a tricky option for any woman, since purple can be so very warm or cool, so dated or modern.

While Carrie Underwood, Alyson Hannigan and even fashion maven Heidi Klum attempted it, the first two seemed a bit "bridal party/prom" and the last felt Vegas (Tim Gunn described Klum's gown as "pomegranate," but I'm including it in the purple/berry neighborhood of the color wheel all the same).


My favorite plummy look of the night came from comedienne Mindy Kaling: a modern, curve-flattering fit with embellishments that frame her face and just the right "Old Hollywood" hair to celebrate a glam occasion. 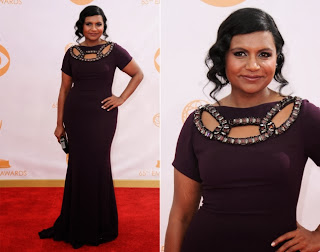 Speaking of embellishments, where is the line between bold or brash, fascinating or fussy? Here's my take on a few eye-catching looks. 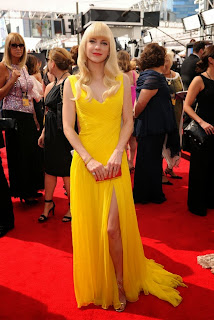 I can't help it: I like this. It's a breath of fresh air, it's fun, and Anna Faris has a green lizard brooch on the back not seen here. I pick up notes of classic "Old Hollywood" alongside a bit of rockabilly. She looks like she's here to enjoy a party, and that makes the rest of us want to have a bit of fun, too. Verdict: deliciously free of feeling stuffy.


I love sisters Emily and Zooey Deschanel: from "Bones" to "New Girl", the talented actresses portray characters I relish. I'm a fan of Zooey's Hello Giggles website collaboration and I enjoy that she sports quirky manicures at Red Carpet events.

This particular event, however, both sisters chose ensembles that felt - to me - not youthful; in fact, the dreaded phrase "mother of the bride" sprang unbidden to mind, which I found distressing since I genuinely enjoy their fashion choices the majority of the time. 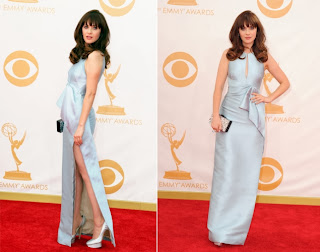 Instead, I found myself favoring the bold, unfussy blue that Tina Fey sported - and, in her case, it did feel like sport. It looked easy (though I'm sure the Spanx did not feel so); she looked at home in her own skin, relaxed. 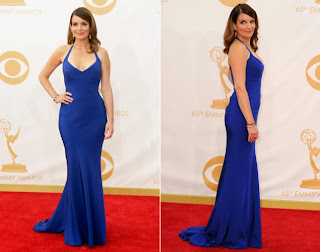 In a different shade of bold, Jennifer Westfeldt wore one of my favorite looks of the night: the material, cut and design felt vintage, but the color breathed deeply of vibrant life. Many women could not carry it off; she did, with zest. 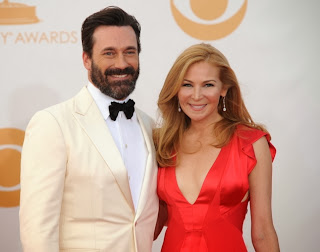 Bold colors aside, some prints, embellishments, tattoos and "bling" accompanied some decidedly "love it or hate it" looks.

In this area, much depends on personal taste. I think some of the risks worked, some didn't and some, for better or for worse, I'll never forget. 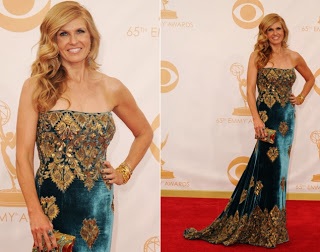 I'm very biased toward Connie Britton's gown: it found its way onto my Pinterest Red Carpet board several months back. While I think that a gown this embellished would be best served with an up-do rather than draping curls - and while I think this gown would be best served with alabaster skin rather than a bronzed tan - those are styling quibbles: I'll always love this dress. 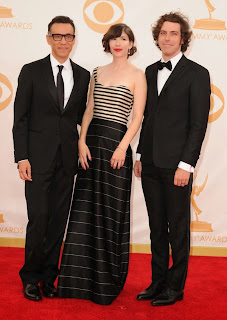 "Portlandia" star Carrie Brownstein struck a whimsical chord with her striped dress; and if the heavily embroidered teal gown above was a touch too "Dowager" for the Emmy's, the one-shouldered look with two different patterns somehow evoked an almost Chaplin-esque nod - maybe due to its ability to evoke menswear, as if it took inspiration from a bow-tie or cravat. I think its understated charm may get overlooked as reviews roll in. 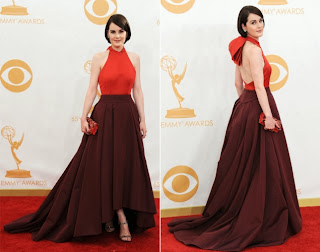 "Downton Abbey"'s Michelle Dockery kept her look effortless, and I enjoy her Prada color blocking, the barely hi-low skirt, and the rather French-looking (why am I thinking French? I don't know) exuberance of  bow that ties the halter. It has the sensibility of so many Marion Cotillard Red Carpet looks, which always seem as if she drifted in from a Parisian wander. 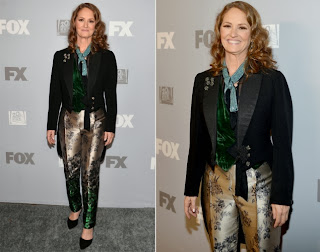 What to do with Melissa Leo? The unconventional ensemble garnered a smile from me, as the actress seemed to channel Johnny Depp's taste. Glamorous? Perhaps not. But it entertained me, and she looks like she's having fun - which makes any outfit seem clever, whether you personally would wear it or not. 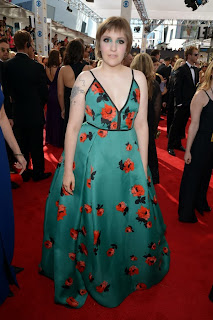 Which brings us to Lena Dunham. The writer and director may not be everyone's cup of tea, and her Emmy look certainly wasn't, as reviews are proving today. But there's something about it that appeals to me: namely, that I get the feeling that she wore what she liked and what she wanted to, and really didn't care if anyone else liked it or not.

And that spirit is something I appreciate. Incidentally, I do enjoy the gown, even if it is accessorized with a lot of ink and a rather shaggy pixie cut. It's possible she'll regret her choice in a few years, though I rather think not, from the sense I get from her interviews.

I can't decide what I think of this look, but I know one thing: I won't forget it soon. Which may just mean that Ms. Dunham is getting exactly what she's looking for ("I'll ride this worst-dressed list all the way to the bank!" she may be thinking...) 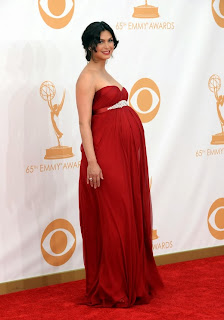 I'll conclude with Morena Baccarin, who is eliciting a stand-up-and-slowly-applaud response from me...the "Homeland" actress is lo, with child, and took to the Red Carpet with a gorgeous red gown. When I was that pregnant...well, let's just say that she looked radiant, and I hope she's able to sit with her feet up today. Brava, Morena!

So thanks to www.nydailynews.com and www.hollywoodlife.com for these photos. And thanks, all you ladies, for representing the rest of us, who stayed at home in old workout pants with our hair in a quick ponytail-bun. Even if I take just a hue or a hairstyle inspiration from you (and your hard-working stylists, I know), you make us all feel that a little bit of glamour is accessible. At its best, the beauty of fashion brings out, not the worst in women, but the best.
No comments: