“You do not seek to kill me, Dumbledore?” called Voldemort, his scarlet eyes narrowed. “Above such brutality, are you?”
“We both know that there are other ways of destroying a man, Tom,” Dumbledore said calmly. “Merely taking your life would not satisfy me, I admit —”
“There is nothing worse than death, Dumbledore!” snarled Voldemort.
“You are quite wrong,” said Dumbledore, speaking as lightly as though they were discussing the matter over drinks. “Indeed, your failure to understand that there are things much worse than death has always been your greatest weakness.”

-Harry Potter and the Order of the Phoenix

I awoke this morning to the realization that we are living in bizarre days. Globally, there are headlines about politics in North America – specifically, the revelation of government surveillance on millions of private citizens who are under no specific suspicion, in the name of safety and defense against those who wish us harm. This, in itself, is not bizarre. Many governments have done this – in real history and in fictional lore – for millennia. (Just try to get through a news piece on this topic without reading the name Orwell.)
It may seem bizarre that a young country with a freshly minted Bill of Rights might engage in this practice, but it’s not new on the global scene.

And so this OpEd by Maureen Dowd (ranked #43 on The Daily Telegraph's 2010 list of the 100 most influential liberals in America) sits comfortably alongside this OpEd on www.redstate.com – Red State, as in conservative. 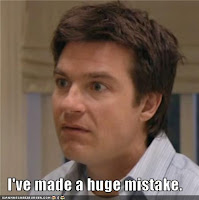 Who, exactly, are our bedfellows?

Liberals and conservatives are rolling over and asking just who we woke up with this morning – and many, like so many Bluth family members, are mumbling, “I’ve made a huge mistake.”

So, while private citizens, politicians and talking heads gathered their belongings and prepared for an ideological walk of shame, I wrote this to one of our U.S. Senators:

Senator, for our founding fathers, safety was not the primary good; freedom was. Under your reasoning, British leaders should have kept Londoners safe by compromising with the Nazis rather than submit Londoners to the daily, lethal dangers of the Blitz. 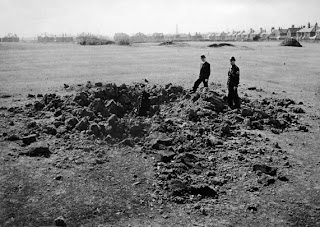 I’m referring, of course, to the English practice during and after WWII, when golf course designers simply turned bomb craters into hazards on golf courses, as mentioned in this review of Hayling Golf Club in Hampshire: “The bottom half of the course was taken over by the Army during the second world war and concrete ‘pill boxes’ are still evident as are the grassed over bomb craters that for example are employed as part of the hazards between the ninth and fourteenth fairways.”

Knowing a great many golf lovers, I acknowledge that the following wartime rules may attest more to golfers’ love of golf than lack of fear of bombs. “Neither rain, nor snow, nor German bombers will keep me from my tee time,” in other words. And yet, consider these wartime golf rules, as commented on by a member of www.thesandtrap.com :

“Came across some local rules that were implemented by my club during the war. Bearing in mind we are within a few miles of Croydon, Kenley and Biggin Hill (wartime fighter bases). Some are obvious and a few remind us of the "we carry on regardless" attitude of the people at that time.

1 Players are asked to collect bomb and shrapnel splinters 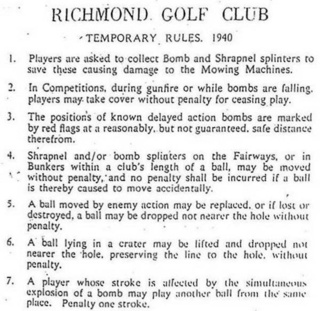 to save these causing damage to the mowing machines.
2 In competitions during gunfire or while bombs are falling players may take cover without penalty for ceasing play (I like the word "may" in that one).
3 The positions of known delayed action bombs are marked by red flags at a reasonable, but not guaranteed safe distance therefrom.
4 Shrapnel and or bomb splinters on the fairway or in bunkers within a clubs length of the ball may be moved without penalty and no penalty is incurred it the ball is moved accidentally whilst doing so.
5 A ball moved by, lost or destroyed by enemy action may be replaced with a drop not nearer the hole without penalty.
6 A ball lying in a bomb crater may be lifted and dropped not nearer the hole, preserving the line to the hole. Without penalty.
7 A player whose stroke is affected by simultaneous explosion of a bomb may play another ball from the same place with a penalty of one stroke (A bit harsh that one if you ask me).

In other words, safety is not the highest good; as J.K. Rowling remarks through the words of Dumbledore, there are things worse than death.

We grieve as a nation after every attack by domestic and foreign terrorists. But if we blame our government for loss of life rather than the perpetrators, then we indulge in misguided grief. Politicians respond “you’re right, we must do more, we (the perpetually running for office “we”) must do anything necessary to spare loss of life.”

Writer Philip Yancey recently reflected on his visit to D-Day sites in France, and recalled these words:

“When we have overcome absence with phone calls, winglessness with airplanes, summer heat with air-conditioning—when we have overcome all these and much more besides, then there will abide two things with which we must cope: the evil in our hearts and death.”  Nicholas Wolterstorff wrote those words in his poignant tribute Lament for a Son. On the battlefields of Europe—and not just Europe— those two things converge.

Only when we cope with “the evil in our hearts and death” can we embrace freedom. We must learn to cope with death again.