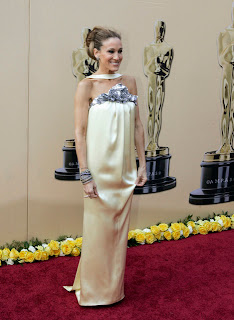 And THAT is What I Like About that.
5 comments:

I'm pretty sure I've been hibernating. All I remember of the last couple of months is condensed into vague recollections and blurred colors. I have evidence of emails I've sent - there are replies in my inbox. My camera holds photos I've apparently taken. There is clean laundry in dressers - I must have done it at some point. The dogs are still alive. I think Sweet Husband mostly had something to do with that. Even my ivy and shamrock on the kitchen table are still perched with leaves toward the sun - or window, in any event.

Lost is in its last season, and I think new parents everywhere can understand the show's premise: something cataclysmic happens. You're disoriented, stumbling around. You attempt to create a new existence. Strange noises come at you through the night while you sleep.

But I've been rescued off the island - Jack has begun to sleep through the night. A rare blessing, from what I hear, from a two-month-old. Slowly, random scenes are flickering across my vision, a few haphazard memories returning. Sweet Husband is present to confirm my suspicions.

"I remembered something this morning about you saying a few days ago that Steve called. Is that true, or did I dream it?"

And there you have the results of sleeping two, three, four hours at a time, after going through the physical and emotional trauma of childbirth.

Then again, I may be off the island, but lingering effects remain. For instance, the other day, to my friend Angie:

"Why are we standing in this line again? OH. Right. Lunch."

For about five seconds I could not, for the life of me, recall what I was in line for. Even though there was a counter - with food - that smelled good - five feet in front of us.

Hello, brief introduction to dementia. See you again in fifty years, or the next time I have a child.

I'm lucky I even remember I have a blog.

But what's Lost can, indeed, be Found - even if I have to look for it so long I forget what I'm searching for.
3 comments: