Check out the credentials on this guy...
Gov. Bobby Jindal has written an op-ed for the Washington Post on conservative options for health care reform. It offers a variety of ideas for the kinds of ways that health care in the U.S. can be improved for folks; and interestingly, it does so in a way that engages him in a key issue for the current administration's tenure.

And you can tell the difference between a politician and a statesman, which are rarely one in the same: I think he has the potential to be a savvy politician and a substantive statesman. Why? Because he actually knows his stuff. It's not hard to sort out leaders who parrot what advisors are feeding them from leaders who generate their own ideas, from their own experience.
A quick glance at his page on Wikipedia reveals this: "In 1996 Foster appointed Jindal to be secretary of the Louisiana Department of Health and Hospitals, an agency that then represented about 40 percent of the state budget. During his tenure as secretary, Louisiana's Medicaid program went from bankruptcy with a $400 million deficit into three years of surpluses totaling $220 million. Jindal was criticized during the 2007
campaign by the LouisianaAFL-CIO for having closed some local clinics to balance the budget. In 1998, Jindal was appointed executive director of the National Bipartisan Commission on the Future of Medicare, a 17-member panel charged with devising plans to reform
Medicare."

And that doesn't include his experience at Oxford as a Rhodes scholar.
You can read his thoughts here, titled "The Conservative Case for Reform":
http://www.washingtonpost.com/wp-dyn/content/article/200
9/10/04/AR2009100402003.html
Who knows, he might even give former Gov. Sarah Palin a run for her money with the hunting/fishing folk... 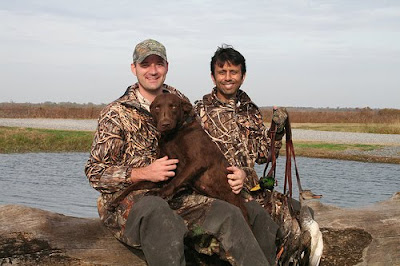 When I live in Louisiana (and am not traipsing about in Honduras) that's my gov'nor. Good man. I am proud that my state didn't look at his race. His parents are from India. That's almost black to many rural people in the South. Kinda brown ya know. Anyway it's a good sign for Louisiana to have an honest and competent governor. Especially since we have a former US rep in the big house, as well as one of the governors, too....

It will be a good thing to have some potential leaders/statesmen in the run next time around.

i'm also in La....i've heard him speak and he's brilliant...voted for him and hope to again. All that said: he's been a little disappointing as govornor as he's been a bit disorganized as a leader and a bit to keen on building up his national image. And some of his state healthcare decisions will not "play well" i'm afraid if he does run for national office...(i don't even like them and i like him!)but...there are no easy answers, right?

Thanks, Louisiana ladies, for your feedback! It's great to have your perspective.