Photos Not Taken By Me

This photo was not taken by me: 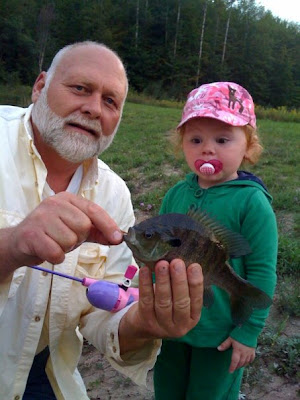 This is my Uncle Dave with my cousin Susan's wee girl, Savannah. "Oh, cute, your cousin's family took the little girl fishing," you think.

These are Michigan people, people. They don't "help" the girl "catch" a fish.
If there is a fish on her line, she caught it. No help. Just her. It's the way they roll.

Don't believe me? Let me tell you about cousin Susan. When she was in middle school, one of her older brother's friends came by the house looking for him: the guy had shot a deer but needed help gutting it. But Buzz wasn't in. And my aunt was really sick.
"SUSAN!"
Little middle school Susan came down the stairs.
"Go show him how to gut his deer."
And away they went.
Agree or disagree on policy, this is the kind of thing City Folk don't get about Sarah Palin.

THIS photo was not taken by me, either: 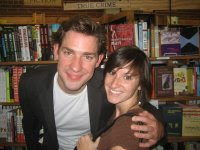 That, my friends, is Emily, who often comments on this blog and writes her own stuff over on http://www.hatandgloves.blogspot.com. I was in her wedding in May.

Emily, with "Jim Halpert" from "The Office" - actor John Krasinski. SO COOL. Mostly because "The Office" is one of my favorite shows ever, and started out as a little indie-type comedy. Emily and her new husband Jonny just moved out to L.A. where Jonny is finishing his college degree after - ahem - many years in and out of college. Whatever works, people. Just get there eventually. Anyway, Jonny's doing a semester in film school and he messaged me on Facebook today. It went something like:

J: "Hi"
E: Hey there, L.A. Guy!
blah blah blah
E: So, have you seen Paris Hilton at an In-N-Out Burger at 3 A.M. yet? (Ha ha, I'm so funny, as if L.A. is a small place where you constantly run into celebrities)
J: So I met John Krasinski.
E: AHAHGHGHGH WHAT? But...but I was just joking about bumping elbows with...

Anyway. Awesome, Emily. I miss you, you all way-out-West and not in central Kentucky, where there are license plate frames that read "Southern By The Grace Of God" in the Wal-Mart parking lot.

And now, this photo was not taken by me, either: 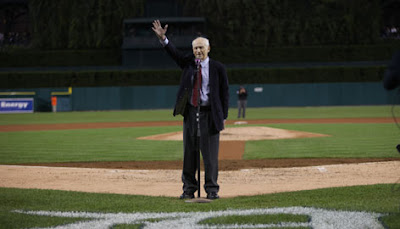 This, my friends, is Ernie Harwell, voice of my childhood. And by that, I mean voice of the Detroit Tigers for lo, many years. Growing up in central Indiana, I would hang out drawing and playing in my Dad's studio while he painted, the radio tuned to crackly WJR, where we listened to the soft thump of a baseball hitting a catcher's mitt, and the echoing cries of hot dog vendors walking up and down the miles and miles of stairs in old Tiger Stadium. One time I was in the living room and heard Dad scream - not yell, scream - and Mom came running from the kitchen in her apron, tears on her cheeks, scared to death because of the chemicals Dad kept in the studio, and had he gotten burned, and boy was she mad when she found out...

He'd just been announced as a winner of two tickets to a Detroit Tigers baseball game.

Another time, I was at a game with Dad, and had to go to the bathroom. Several minutes later I came out, and he was frantic.

"Elizabeth, Elizabeth, I was JUST TALKING to Ernie Harwell - what were you doing? I called in there for you, he's walking away, you can see his back just there, over by - what was TAKING so long?"

Well, I was like 13, so I was primping, of course. Not that it did much good in THOSE pictures, yikes. You'll notice a lack of those pictures on this site.

Anyway, Ernie Harwell is dying of cancer. I remember the loose scrawl of an autograph he signed in the cover of a book Dad sent him.

Ernie and Lulu have been married 68 years. People always called him "the voice of the Tigers." He was also the voice of my early childhood years. Which is why I went around saying "He stood there like a house by the side of the road" occasionally - not the norm for a six-year-old girl, but a good description of a guy standing still as a strike ball whizzes over the plate.

On a less mournful note: this photo was also not taken by me: 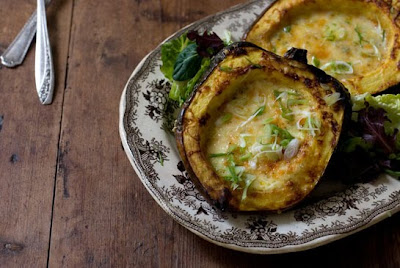 I know what you're thinking: what is that, and how quickly can I make it?

I know: brilliant, right? A perfect Autumn recipe? The best of so, so many worlds.

Here's the link to the recipe:http://www.101cookbooks.com/archives/roasted-corn-pudding-in-acorn-squash-recipe.html

I will probably leave out the anise seed. Anise - with the hint of a licorice taste? Seems unnecessary and distracting.

I'm going to have lots of leftovers: will John touch corn pudding? Yes. Will he touch it roasted in acorn squash? Not likely. I'll make him take a bite, though. He always does when I tell him he has to get used to it because The Kids Need To See Dad Willing To Try Dishes If They Have To. And he's always game for the One Bite.

Well, that's all the photos not taken by me for today. I may surprise you someday with things like "cats I didn't hit" or "poems I didn't write."

Haha! Very nice. You could take this all sorts of different directions, you know!

Your possibilities are endless here!

Yes, Savannah, who is 2 years old, caught that fish herself with her own little pink and purple fishing rod. Grandpa was (is) incredibly proud of this feat!
Great-aunt Lois
(Elizabeth's mom)

The roasted corn pudding in the acorn squash looks delicious, but your grandpa will try anything once.

You know....if you and your cousin Carrie ever collaborated on a book....?????? It could be called.."Growing Up Slightly Twisted"... or "My Last Breath Will Be a Pun"...as Carrie says, "all sorts of possibilities." oooh ooh.... or "My favorite dad/uncle Bob" ! sounds good to me

The first picture, it is quite good. The girl has a surprise looks when she is looking to the fish.