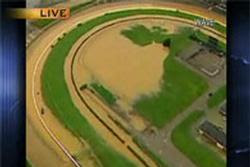 Was noting via the tube that the Bluegrass is inundated. Best of luck, hope all is well at your digs.

The story? He probably had it coming, but I cringe too much to be able to laugh.

I admit, there are occasional flashes of violent instincts within me that must surely bode back to a heritage related to Boadicea, Warrior Queen of the Celts! ;)

It's rather like the poor construction fellow at the beginning of "Hitchhiker's Guide to the Galaxy," who can't figure out why he keeps envisioning burning huts and fur hats, unaware of his direct descent from Ghengis Khan! :)

Of course, one wonders if one's occasional malaise is simply related to Not Having A Country To Run, but of course, one can never know, in a democracy, and in the confines of one's own space and time. At any rate, I began to have the sneaking suspicion that I was less likely an offshoot of illegitimate royalty, and more likely, simply Scottish, since they all think they're all as good as royal anyway! But being American, One Never Knows. However, I can most definitely rule out being Anastasia!

And piles of dishes, dirty laundry, and dust do keep one's feet firmly on the ground ;) There are, however, those moments, when fierce battle cries seem more appropriate than the whirring of a nearby weed eater...

People wonder why I Drive The Way I Do, but it's because these kinds of things are on my mind, and not so much speed limit signs. That or theological meanderings. I was thinking today of writing a sermon on the Divine inspiration of Scripture using the Gospel of Luke as a starting point, and calling it, "Luke...I am your Father..." And then I realized my turn was coming up soon.

There were reasons I identified so strongly with Anne of Green Gables, growing up. "Woolgathering" doesn't BEGIN to cover it.

Cowgirl in the City said...

Love it! I heard about this briefly on the radio, but incredibly your synopsis of the incident is even more funny! :) Stupid guy. He deserved it. But ouch!

I read the story to my husband and his response? "Good!"

And I'm all about woolgathering... after all what else are blogs for but to air all that wool we gathered!

hahaha,,,I had told your granpa when he was younger, if he ever even thought about something like that, I would get him when he was asleep some night. I think he thought I was crazy enough to try it, too. The scripture warns about making a woman angry, and he had it coming. Bet he doesn't try it again. Now they all need to get saved and start living for the LORD. love you. granmaG.

Our A&W root beer stand has cheese curds and they are awesome! As for the guy, he needs to...ahem...stick to one woman.