The Time Dad Got Rid of the Tomcats 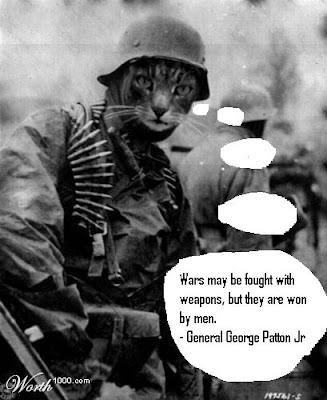 It was a hot and humid summer in central Indiana.

The night, indeed, was sultry.

And the tomcats  were a-prowlin'.

In fact, I remember waking up in the middle of the night to the most raucous racket I'd ever heard. It was a tomcat fight in the backyard.

We lived across the street from the church. I don't know if the tomcats bothered the church. But they loved our house.

Many was the morning my Dad would step out onto the front porch and run back in, infuriated by the reek of multiple toms marking their territory. Apparently, our house was their territory.

But how to get rid of the tomcats? Dad's logical, and primal, answer, was basic. The house needed marked - as our territory.

When asked how old he was at this time, Younger Brother replies, "well, I didn't have my toy velociraptor yet, so I couldn't have been older than seven." He recalls the battle plan: "I remember Dad's fervent insistance: his fire-eyed jihad upon the cats had begun."

Loathe to use actual violence to discourage the neighborhood toms, biological warfare seemed the most humane response.

"I remember thinking, even then, 'this can't be normal.' Does my friend Randy have to do this? Alas, my friend Randy did not have a Dad. But he missed out on these unique father-son moments."

So, taking inspiration from Kevin Costner, Dad combined two of his works: "Message in a Bottle," and "Waterworld."

"The battleplan was as follows," recounts Younger Brother, flickers of expression moving across his face with the memory of the field of battle. "Dad's reason led him to the conclusion that we must fight fire with fire. So, in response to the cats' hormonal discharges, Dad concluded that to fight their instinctual battle and assert our own dominance, we would simply have to overwhelm their own scent with our own."

My own recollections of this time inevitably center around searching for something in the bathroom. After opening the cabinet door under the sink, I recoiled: a partially full 2-liter bottle stood, waiting, ominous.

Younger brother describes, "I remember waking, bleary-eyed, one morning, stumbling to the nearby bathroom,the insistent pressure from my bladder telling me what must be done. Relieved, and slightly more awake, I went to leave the bathroom, only to find my way blocked by my father."

"Did you pee in the bottle?" he demanded.

Confused, my mind cast about in my early morning haze, trying to decipher what he was talking about.

"Well, that's alright, just try to remember to pee in the bottle, Ethan."

Brother continues, "While I had, indeed, forgotten, I was not very remorseful, as the struggle of a seven-year-old boy trying to urinate in a 2-liter bottle was not an obstacle easily overcome. The slowly increasing weight of the bottle made it difficult to fulfill my father's wishes. My inherently acrobatic nature was called upon."

While Younger Brother was attempting to remember to "use the bottle" every time he visited the bathroom, the tomcats were still wreaking havoc nightly on the front porch. Time was running out. I avoided the bathroom cabinet. So did Mom.

Slowly, the accumulated efforts of my father and brother began to spell the end of the carefully planned assault. It was just as well: it was difficult to avoid the cabinet indefinitely.

Finally, the bottle was deemed Full Enough. Younger Brother and I went to bed one night, anticipating the morning's outcome.

Stalking in the moonlight, the silver light bouncing off the fury in his eyes (the battle rage had taken him), Dad took a midnight stroll around the house with the bottle.

The results were immediate. The tomcats got the message - all 2 liters of it. It was a Mason-Dixon line of urinated fury. Mom rolled her eyes, glad the campaign was finished. I could once again open the bathroom cabinet, free from the ominous green glint of the Mountain Dew bottle. Ethan could pee freely without balancing a soda bottle full of old urine.

When later questioned by parishioners on the method used for so effectively ridding the parsonage of the toms, Dad became increasingly cagey, shying away from the discussion altogether.

And so it is, on this hot, humid July day, we raise our glasses - and bottles - to battles past, and victories fought with blood, sweat, tears and urine.  The tomcats were banished forever.

HAHAHAHAHA!! Why didn't you tell Angie and me this story a year and a half ago? We could've been saved from that howling devil in the basement, and no, I do not mean Bones.

Aaron was seven at the time, too.

Thanks for the story. (Can hardly wait for "Bob's" comment.)

Okay, first of all, you forgot that I spend several evenings hiding behind the big maple tree with my slingshot. Even after hitting one of the terrorists in the ribs and seeing it shoot into the air about 3 or 4 feet, they still persisted in tearing into our trash bags. ...and I see you didn't mention your continued fear of Nazis- even to this day! I have a blog too my dear daughter! Let's see- life saver holes? Kibbles and Bits? the bicycle debacle? which one first?

Surrounding circumstances aside, the gist of the story remains the same, much like Ralphie's father fighting the furnace in "A Christmas Story," or the Bumpus hounds.
The time the toms were banished was the mere apex of a slowly building drama.

Yet, something about the whole story doesn't really surprise me either. What a great family heritage.

I just told that to a friend of mine who has raccoons getting into her barn and eating the horses' oats..she showed me a picture of 3 of them up in a tree, I told her to tell her husband to try this method and maybe they would quit coming around.,,It might work.lol Also reminds me of a song, " Precious Memories, How they linger" GranmaG.

That will also keep the deer away from your hostas. Not that I would know anything about that. The great part of being related is that I can see uncle Bob traipsing around the house with a two liter, praying he doesn't trip.

Meme time. You have been tagged. It's all Chuck's fault.