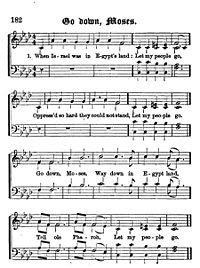 Almost one hundred and fifty years ago, a war ripped the still-adolescent United States of America in half. Lights twinkled on the northern side of the Ohio River, beckoning slaves through dark, moonlit paths, across the water. To reach the other side was to breathe the air of freedom. Some of those houses still stand on the northern bank of the river dramatically captured in Harriet Beecher Stowe's "Uncle Tom's Cabin," in Eliza's frantic escape scene.

Oh! go down, Moses,
Away down to Egypt's land,
And tell King Pharaoh
To let my people go.

During that time, when families were split apart, North and South, fighting on different sides of the war, Old Testament imagery illustrated the slaves' bid for freedom. Some spirituals employed specific code, so that women and men could communicate with each other in song, while working in the fields.

The North was the Promised Land. In broader meaning, the Civil War was fought to make sure that all the borders - north, south, east, and west - of the United States lined a whole Promised Land, in which plantations built on the shoulders of whip-scarred slaves did not constitute the only future for a person with black skin.

One hundred years later, the Promised Land still wasn't present in the South, and the

Civil Rights movement demanded that a little seamstress tired from a day of work should sit wherever she wanted on the city bus.

In the last decade, President George W. Bush has created the most diverse administration in the history of this country - including Elaine Chao, Alberto Gonzalez, Margaret Spellings, Carlos Gutierrez, Gen. Colin Powell, and current Secretary of State Condoleezza Rice.

There will be plenty of time in coming months to state my disagreements with the ideas of the now Majority Party. Goodness knows I've done that sufficiently the last few months.

But today - today is a day to express, in a completely new way, Thanksgiving. The United States of America has overcome a burdened common memory replete with the pain of past wrongs, the struggles of the present to live with dignity, and the scramble to ensure for the future the knowledge, in living memory, of a living, breathing, tangible example of someone in leadership who looks just like you.

Just a few months ago, I wrote about what it felt like to watch a woman receive honor: the way it washed away the pain of having seen women mistreated. Sharp memories dulled a little in their ability to wound.

I am so profoundly proud to know that sisters and brothers around my nation get to feel that today. If there is a ghost in the Lincoln bedroom, as White House rumors speculate, he must be smiling to know that from the days of Lincoln, the White House has come full circle.

Any man or woman who has a certificate tucked away in a chest full of heirlooms that shows a mother or grandfather's entrance into the United States through Ellis Island should reflect on the gifts available to all immigrants.

Hispanic citizens working hard to learn a new language, navigate a new government, and earn money for their families can sense the new urgency of motivation - there is room, in our country, for you. There is room for you to do whatever you have the courage and vision to carry out. There is room for Gonzalezes, for Smiths, for O'Hares. And yes, for Obamas.

Oh! go down, Moses,
Away down to Egypt's land,
And tell King Pharaoh
To let my people go.

Hmmm. Well said. In many ways I share your thoughts. Hang in there.