There are certain items in style that I Won't Do. Crocheted red, white and blue vests with stars on them, for instance. My friends studying to be teachers took vows never, ever to wear denim jumpers with cardigans bedecked in apples, 1-2-3's, and A-B-C's.

And after post - after post - on women and politics, there's one aspect that I haven't admitted yet that is ridiculously fun.

Fashion watching. I am one of those people who has stopped you, a stranger, in the women's room to say "hey, cute shoes!" or "awesome bag!" or "great jacket!" Yes, yes, I've also been stopped in gift stores and, once, an airplane aisle, for comments on my shoes and purse.

So it feels a little bit like "Project Runway" - a really fun show, by the way - whenever the news comes on. Not so much with Hillary - she never quite escaped the shadow of lawyer-dress

ing. But Michelle Obama, then Cindy McCain, then Sarah Palin have allowed me to sit back and enjoy a runway of a different kind.

Michelle Obama has a great, classic-yet-modern sensibility that had GAP stores running out of the dresses she wore. She's like an updated Jackie O, and it's fun to watch what she wears and she pairs it with jewelry, etc. 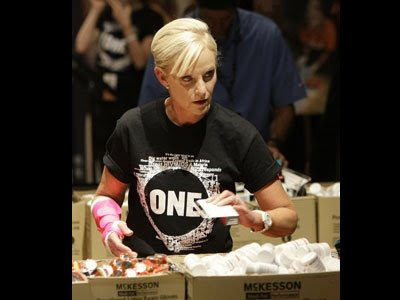 Cindy McCain has been a little more hit and miss - she had been doing the business suit with huge glittery - real - bejeweled political brooches. I didn't like that as much. But a couple of recent events have shown a great side - when she sported the black ONE t-shirt, and her stunning gown at the convention. And I don't want to hear the estimate of what her ensemble cost, critics: voters aren't paying 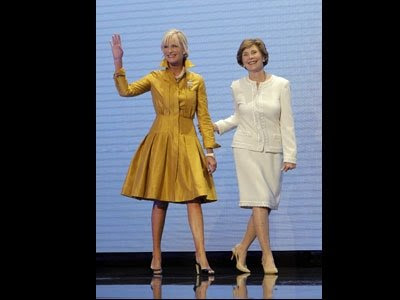 for it, she runs a company, she can wear what she wants.

Sarah Palin's glasses have made as much of an impact - sorry, Jennifer - as Aniston's haircut did in the late 90's. I've never heard so much spec speculation. They're okay. What I really like, though? Her shoe choices. Someone commented, "have any other women in this election gotten so much attention to their shoes?" Answer: no 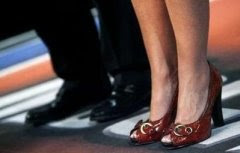 one else's have been this cute. Especially the red ones. Of course, I have a standing policy with myself to always have at least one pair of red shoes in my closet. She's done well, too, with her jacket-skirt combinations. I spent a while this morning "googling" the cute blue jacket she wore for part of her Gibson interview. Can't find it anywhere yet.

I wonder what Condoleezza Rice thinks of all this. Her boots made headlines a few years ago, as Secretary of State. They were super chic, too. I wonder if she rolls her eyes and thinks, "pundits on policy and fashion. Now these women are experiencing it, too." Or if she smiles to herself and thinks, "that's right. We can run the country and look smashing doing it."

Old school 60's feminists aren't always comfortable with this discussion. But no one's arguing that anyone should get elected on their fashion choices. But women aren't compartmentalized as only leaders, or only fashionistas, or only policy makers. And for women who enjoy being more than one of these?

Well, their mark will be all the more lasting. No matter who's wearing it, chic is chic - red or blue.