“I'm the deadliest woman in the world but right now I'm just scared ****less for my baby.”

It may strike some readers as strange, but the fact of the matter is, a few basic words are popular both to this fall's election and Quentin Tarantino's comic book-esque revenge films, Kill Bill Volumes 1 & 2. Maternity. Violence. Womanhood. Guns.

And that quote? It comes from a part of Kill Bill Vol. 2 in which the main character, known alternately as "The Bride" and Beatrix Kiddo, is being chased down by another female assassin. Unfortunately, the assassin finds her in a bit of an awkward spot - waiting for the results of a home pregnancy test. Kiddo pleads with the woman to check the result for her, and they fumble, attempting to decipher the symbols on the stick.

Kiddo acknowledges that they both could kill each other there, on the spot, but explains that she's just found this out, that she has a lot on her plate, and that they can fight another day: will the other assassin please - just go?

Tarantino's cartoonish, spaghetti western, Asian-influenced revenge films show that violence and maternal instinct can sit together comfortably: The Bride is getting her revenge on Bill for killing her entire wedding party, leaving her for dead, and leaving the fate of her baby unknown.

In the midst of the garish scenes of violence, in which Monty Python-esque blood spurts like a water fountain, one of the only scenes that truly disturbed me was the moment Beatrix wakes up from her coma - and feels the flat stomach where the pregnant stomach used to be. The camera doesn't budge for several grueling minutes as The Bride wails and sobs.

It is that one shot that propels the rest of the movie forward. Because at this point, it's not a matter of hateful revenge; it's a matter, the audience realizes, of justice, too.

And let me tell you something, as a woman: you find you can't blame Beatrix in the least.

But most women will tell you that a strangely powerful instinct kicks in when anyone under their roof is threatened, harmed, or killed.

Do I blame Sarah Palin for owning guns?

In fact, this is what Angelina Jolie said in an interview with Entertainment Weekly from last spring:

Do you worry that people will have a hard time squaring this gun-toting character with your role as a U.N. Goodwill Ambassador? They do seem quite incongruous. "I am a strong believer tha 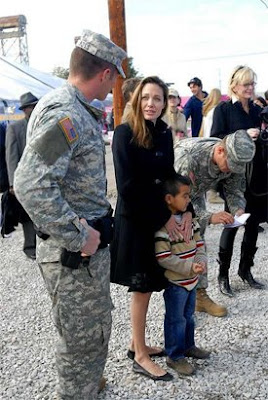 t without justice there is no peace. No lasting peace, anyway. I'm somebody who's very curious about the International Criminal Court and supportive of following through on the arrest warrants in Darfur. I'm not somebody that just wants to hold up a white flag and say, ''Let's all just get along.'' I think people that do horrible things should be held accountable. I don't think like in Wanted — which is an action movie — people should [just] be killed. I think there should be trials and justice. But the idea behind Wanted is not that she's an assassin that just likes to kill people. It's that, if you ran into Hitler before he did everything, and you knew, should you shoot him? And I would. These assassins are getting lists: They find out who is going to slaughter other people ahead of time and they remove them. So that was the side of me that identified with her. But it is a confusing thing, certainly for rights activists. Don't read too much into it. I am holding a gun, but there are so many people that have done so many horrible things... Pol Pot died a grandfather in the jungle, most likely of old age. Never was punished for what he did."

Clint Eastwood is one of our most famous Republicans. Did you talk politics with him on the set? "Actually, we don't disagree as much as you'd think. I think people assume I'm a Democrat. But I'm registered independent and I'm still undecided. So I'm looking at McCain as well as Obama. Clint can teach me about things domestically and I'm more aware of some things internationally. So it was less a debate and more things we found interesting."

Recently, when watching "John Adams," I noticed the point at which Adams' wife Abigail, at home on the farm alone with her children, grabs a rifle to see who's coming up the road. Fortunately, it was a group of patriots, and not the nearby British army.

But she grabbed the gun first.

You don't have to be on the frontier to know that evil exists.

Beatrix didn't want to take part in evil anymore when she found out she was pregnant. But she did fight evil until, in her life, it was dead, and she was able, miraculously, to return to being a mother.

And she used a sword to do both.

Only someone who loves Eowyn could have written this :)