Hmmm, how shall I rate my likes and dislikes? Today, I shall use my friendly stuffed scholarly bird, Sir Winston, as a ratings medium. 1 Sir Winston is low. 5 Sir Winstons is high.

Adopt-a-soldier: 5 Sir Winstons
This morning, as I finished my attempt on the New York Times crossword puzzle at the local coffee shop, I noted a couple at a table by the large plate glass window: a man in full military fatigues, with his wife, and a baby in the stroller.

I have seen a display of empty boots representing casualties. It's not pleasant. And I've read numerous stories recently on the rising rates of post-traumatic stress disorder (or shell shock, as the late George Carlin aptly pointed out), depression, substance abuse and alcoholism among returning soldiers. Longer than planned deployments, multiple deployments, and cancelled leaves are ravaging the ranks like a delayed IED that lingers in the soul until feet return to the solid Main Street ground of American cities and towns. Then, the flashbacks, nightmares and memories return. And the women - the wives who stay home, raise children, deal with the broken dishwasher or school bully or teething babies - they all have not only the loneliness and worry to cope with, but the tainted image of the cause itself that causes our soldiers to feel unappreciated.

Whatever your political persuasion, it is the duty of red and blue states to welcome with open arms, and provide for, returning soldiers and their families.

The image of the young family was so gripping that I found myself looking for some kind of an adopt-a-soldier site - and sure enough, it was easy to find, easy to use, and I can't wait to be partnered.

http://adoptaussoldier.org/ partners supporters with soldiers, gives helpful advice about mailing letters and care packages, and offers ideas of things to send. You can rest certain branches of the military, or whether you'd like to be partnered with a male or female soldier. It's a nonprofit organization that started as a grassroots effort by one military mom. Adopt-a-soldier receives 5 Sir Winstons.

Jumbo Remote Control: 3 Sir Winstons
This is just plain ridiculous. The other day, John was lingering around town while I finished a project at work before heading home. Apparently, he decided to kill time in the Dollar General. When I got in the car later, there was a bag with the BIGGEST REMOTE CONTROL I HAVE EVER SEEN in it. Turned sideways, it's about the size of a computer keyboard. Not only could the buttons be read by satellites for "Google Earth," I actually have to use two hands to hold and operate it. It makes me feel like a Lily Tomlin sketch where she plays a little girl in a giant rocking chair. Also, operating this remote actually makes me feel skinnier, it's so big.

The "rationale" for the one dollar purchase was mostly the giant grin on John's face, who proudly held out the new member of the family for my brother to see. Then, in one quick flash of masculine understanding that I will never be privy to, my brother just as quickly gave his argument for the purchase of the remote in not only an accompanying giant grin, but a high-five to John. They both stood, transfixed, muttering in a cult-like monotone, "it's soooo big."

Husband brought home no-reason roses: 5 Sir Winstons
This doesn't take explanation. John went out to play disc golf. I handed him a short list of things to pick up at the store on his way home. Later, the doorbell rang, and there stood my husband, with a beautiful bunch of three red roses in hand. No anniversary. No fight we were making up. Just because. Husbands: take note. This gets a strong, bar-setting 5 Sir Winstons. [Let me add that 9 out of 10 women who say they don't like getting flowers, really wouldn't mind if you get them flowers. Even if they say, "you shouldn't have done that," or "don't spend the money," I've met very few women who actually would see it that way. ]
Guy takes bath in Burger King sink: 2 Sir Winstons
I know, you're wondering why I would give any Sir Winstons to this recent news story. I'll tell you why: it gets a low rating for the gross fact that a guy did this. It gets a slight bump up, though, because people actually found out about the kind of thing that usually just goes unnoticed in fast food restaurants. In my former life, I've worked at both a McD's and a Burger King, and for a very little, regrettable time, a Dairy Queen. So let me just say this: I'm just glad he videoed himself doing it, so somebody found out. Also, I should note, that working in fast food joints long enough, is enough to make anybody insane.
http://radaronline.com/exclusives/2008/08/burger-king-sink-shower.php 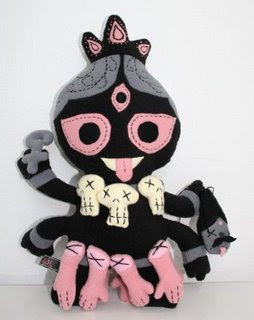 This plush toy gets 4 S.W.'s for making toys for adults. Anything mixing soft toys, mythology, and death - in cute colors, no less - gets my vote. It doesn't get 5 simply out of the fact that Kali, goddess of death just isn't that easily explained - though apparently, not as difficult to market as one would expect.

Catherine Rohr: 5 Sir Winstons
No, no, I don't hand out S.W.'s like parade candy, but this lady deserves it. Catherine Rohr, a Christian, was making $200,000 a year by the time she was 25 on Wall Street.

Then she visited a prison in Texas.

Leaving her job, she and her husband sold up and drove to Texas to start a remarkably effective prison program, teaching inmates business skills, linking them with mentors, providing mock interviews, and connecting program graduates with current inmates. The program is available for inmates with likelihood of upcoming parole. There is a startlingly low 5% recidivism rate.

Caucasian, 32-year-old Rohr doesn't look like the kind of woman who would step in and change the lives of men who've spent literally years in prison, but tough former gangsters tear up when talking about the hope this program gives to men who've missed the cultural trends of the past ten or fifteen years, like the widespread use of cellphones and the internet.

India's poor told to "eat rats": 1 Sir Winston
I give this news story the lowest rating possible. A politician in India compassionately told the poor there that if they're hungry, they should eat rats.

This somehow actually made that Queen - was it Marie Antoinette? - who, when told her people had no bread, responded flippantly, "let them eat cake" - seem kind and gentle.
Here's the news story: http://news.bbc.co.uk/2/hi/south_asia/7557107.stm

Russia ignores truce: 1/2 Sir Winston
Seriously, Putin, don't waste the manpower to establish a truce with Georgia just so you can ignore it. And no, we aren't buying that Medyedev is actually president now, and that you are a humble, unassuming Prime Minister. If you're going to test out your weapons and reawaken images of the U.S.S.R., at least do it openly. I give this situation, and Putin in particular, a pale, measly 1/2 Sir Winston. Because at least you can explain snobbish tendencies of India's politicans due to their caste system. But this? During the Olympics, no less? Please, the Cold War was so a Reagan era ago.
http://www.huffingtonpost.com/2008/08/13/russian-military-convoy-h_n_118601.html

China boots little girl from stage for somebody cuter: 0 Sir Winstons
You may question that I gave Russia a half S.W. and this story 0. People are dying - citizens - and hospitals and schools being destroyed in Russia. But you can at least argue that it's a military deployment. 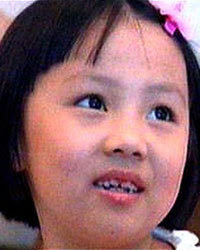 China, however, in a last-minute decision during rehearsal for the opening ceremonies, decided the cute little girl who was singing the anthem was not cute - she had crooked teeth. Another little girl, often used in Chinese commercials, was brought out on stage to lip synch the anthem. The girl who actually sang it, pictured here, in a truly heart-rending gesture, said "I was just glad to be able to sing." And I'm sure she was. But from here on out, she will have the memory of being not cute enough.

And for some reason, be it all the attention on China's role in hosting, or the fact that an election year engenders nationalism, or the economy keeping people home and watching tv, everybody seems to be watching the Olympics this year. Which is fine: watch, support, applaud, ooh and ahh, I don't care, I wish I could do it with you.

But my rants about the blatant human rights abuses have led me to boycott the Olympics this year.
Here are common responses:

You, yes you, will really matter on NBCs ratings.

Why do you hate America?

Okay, so obviously sarcasm drips from most of those responses. The thing is, I don't care: I don't care whether other people are watching the coverage. I'm happy for them, I applaud. It's a personal decision. It's just something I'm passionate about, and I don't expect everybody to care deeply about this one issue. What I DO expect is that people make sure they are well informed.

Therefore, I'm informing you. The Communist government of China is ridiculous. Not the citizens, the regime. http://www.huffingtonpost.com/2008/08/12/cute-girl-mimed-opening-c_n_118349.html
0 Sir Winstons.

I give you 5 Sir Winstons for doing so.

Email ThisBlogThis!Share to TwitterShare to FacebookShare to Pinterest
Labels: Do Something, Fun Facts, Humor, OpEd, Reviews

A pox on China's house for crushing that little girl....
Do you really have a "Sir Winston"? Can't wait to make his acquaintance, if you do.
Love, Mom

There is NO REASON why you cannot make plush dolls of death.